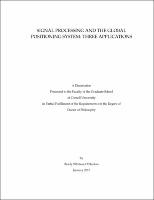 In the interest of producing a GPS receiver uniquely suited to ionospheric study, a software-defined receiver was built: the Connected Autonomous Space Environment Sensor (CASES). This receiver was designed to be inexpensive, easy to modify via software changes, and capable of producing measurements both useful to and understandable by ionospheric scientists. The design and features of this receiver, both the software and the custom-designed hardware upon which it runs are described in detail. In the course of using this receiver to study variations in Total Electron Content (TEC), it was discovered that the phase of the carrier signal from one particular satellite was behaving in a manner not described by the civilian GPS interface specification. Specifically, the carrier was exhibiting aperiodic step changes on the order of 10 degrees. These newly discovered phase anomalies are discussed. The open nature of civilian GPS signals makes those signals vulnerable to spoofing, the transmission of signals intended to appear as legitimate GPS signals for the purpose of deceiving users of those signals. One defense against GPS signal spoofing involves making use of the unknown but presumably secure (and thus un-spoofable) P(Y) code. To demonstrate this method in real-time, the aforementioned software-defined GPS receiver CASES was modified to implement this method. The details of this implementation and experimental results therefrom are described.