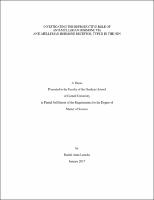 In the mammalian ovary, anti-müllerian hormone (AMH) helps maintain the ovarian reserve by regulating primordial follicle activation and follicular selection, although its role within the avian ovary is unknown. In adult mammals, AMH is primarily produced in granulosa cells of preantral and early antral follicles. Similarly, in the hen, the granulosa cells of smaller follicles are the predominant source of AMH. AMH importance in mammalian ovarian dynamics suggests AMH may have conserved, protective functions within developing follicles in the hen. To better understand the role of AMH in avian follicle development, we studied the expression pattern of the specific AMH receptor. AMH utilizes the TGF-β/SMAD signaling pathway, including the specific Type II receptor, AMHRII. qRT-PCR results indicate that AMHRII mRNA expression, as well as that of AMH, are highest (p<0.01) in small follicles (1 mm) and decrease as follicle size increases. Dissection of 3-5 mm follicles into ooplasm and granulosa components shows that AMHRII mRNA levels are significantly greater in ooplasm than granulosa cells. Immunohistochemistry revealed AMHRII staining in the oocyte and granulosa cells. In mammals, AMH expression is elevated during periods of reproductive dormancy, possibly protecting the ovarian reserve. To assess the expression of AMHRII and AMH during a similar state in chickens, we evaluated mRNA expression in a broiler strain and an egg-laying strain of hens in different reproductive states. AMH and AMHRII mRNA were significantly higher (p<0.05) in non-laying ovaries of broiler hens. In molting (with documented feather loss) and non-molting layer hens, AMHRII mRNA was significantly greater (p<0.05) in molting hen ovaries. These results suggest AMH may contribute to the intra-follicular bidirectional communication between oocyte and granulosa cells, and support a potential role of AMH in limiting follicle recruitment in hens.