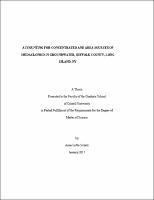 The groundwater in Suffolk County, New York provides drinking water for over one million people and is especially sensitive to contamination from the land surface. The area's suburban and agricultural landscapes are among New York's heaviest users of pesticides. Thus Suffolk County has become the critical test case for New York's regulation of pesticides in groundwater. Imidacloprid —-1-(6-chloro-3-pyridinylmethyl)-N-nitroimidazolidin-2-ylidenamine—- is a systemic chloronicotinyl insecticide and neonicotinoid-class insect neurotoxin and is the most widely used insecticide in the world. It treats a broad variety of crops and ornamentals and is permitted for use on most of Suffolk County's land area. Imidacloprid provides a useful case study of New York's and Suffolk County's ground water protection approach. Existing literature contains numerous examples of contamination of surface waters from uses of imidacloprid in agricultural fields. (US EPA, 2008; Starner & Goh, 2012; Main, et al., 2014; Nemeth-Konda, 2002; Lamers, et al., 2011; Bortoluzzi, et al., 2007). The impact of most agricultural products used in greenhouses -- a very important part of Suffolk County's agriculture -- has not been thoroughly considered, and represents a potential source of groundwater pollution (Kreuger, et al., 2010). This study evaluates results from about 2000 samples from pesticide-targeted monitoring wells in Suffolk County's from 2001 -2010. These data were integrated with applications of root zone and vadose zone transport and fate models, covering both field uses and concentrated uses such as greenhouses with fugitive emissions.. Data from monitor wells show that, in general, imidacloprid concentrations stay far below the State's 50 µg/L standard for unspecified organics in drinking water (NYS DEC, Bureau of Pest Management, 2015). The few exceptions are outlying cases where spills or misuse may have occurred. The root zone and vadose zone models help to account for why widespread imidacloprid use does not translate into widespread ground water contamination in Suffolk County. The deep water table and imidacloprid's degradation rate in the near surface soil are well-documented factors. Degradation within the deeper vadose zone, and unquantified emission pathways from greenhouses are the least understood potential contributors to groundwater quality.