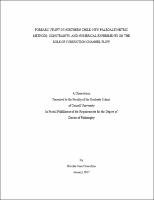 The lithosphere-scale geodynamic mechanisms that control forearc topography are still contentious. In northern Chile, this is in part due to a lack of paleoelevation constraints. In order to rectify this lack of data, this thesis carries out a series of studies. First, a new paleoaltimetry proxy for the hyperarid Atacama Desert was developed, based on the elevation-dependent relationship of the 87Sr/86Sr ratio of Holocene surface accumulations of salts. Here, an important source of calcium sulfate comes from stratocumulus clouds that generate fog on the continent, transferring water droplets to the ground surface which, upon evaporation, precipitate calcium sulfate. The seawater ratio of 87Sr/86Sr (0.70917) is distinctly higher than that of weathered mean Andean rock (<0.70750). Sites below 1075 m.a.s.l. and above 225 m.a.s.l. display Holocene calcium sulfate 87Sr/86Sr of mean value 0.70807 ± 0.00004, while the ratio outside this altitudinal domain is 0.70746 ± 0.00010. Based on these results for Holocene materials, Pliocene-Pleistocene paleoelevations of the forearc surface were inferred. We measured 87Sr/86Sr of dated ancient gypsic soils and applied appropriate corrections to the paleo-fog zone top and bottom. The results show that the magnitudes of paleo-elevation changes are small compared to the elevation of the study area: more than 45% of the ~1000 m.a.s.l. average elevation of the Central Depression and more than 70% of the ~900 m.a.s.l. average elevation of the westernmost Coastal Cordillera were achieved by pre-early Pliocene regional scale tectonic processes. Finally, the response of the forearc surface to 2D viscoelastic flow in a subduction channel was characterized numerically. 800-1100-m-thick subduction channels with viscosities of 5-10 x1018 Pa s best fit the elevations of the Central Depression after steady-state topography is reached in less than 6 myr. The onset of hyperaridity at ~ 25 Ma starved the trench and subduction channel of sediments, raising shear stresses at the plate interface and uplifting the forearc. Short-lived phases of less aridity may have affected forearc topography transiently. The models predict that in order to accord with available Central Depression paleoelevation constraints, these phases translated to pulses of “weaker” subduction channels with viscosities between 2-7 x1018 Pa s.