The Spirit of the Law: The Haunting of U.S. Federal Indian Law in the Contemporary Western 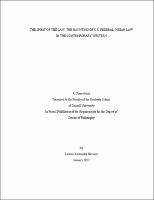