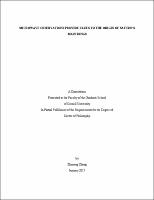 Despite considerable study, Saturn’s rings continue to challenge current theories for their provenance. Water ice comprises the bulk of Saturn’s rings, yet it is the small fraction of non-icy material that is more valuable in revealing clues about the system’s origin and age. Herein, we present new measurements of the non-icy material fraction in Saturn’s main rings, determined from microwave radiometry observations acquired by the Cassini spacecraft at 2.2 cm and multi-wavelength VLA interferometer. We find the C ring particles to be 70%-75% porous. Our results also show that most regions in the C ring contain about 1-2% silicates together with an enhanced abundance in the middle C ring reaching 6%-11% when assumed to be mixed volumetrically (“intramixed”) with water ice. As opposed to an intramixure model, we also consider a silicate-core, icy-mantle model to address the fact that silicates may be present in chunks instead of fine powder in the ring particles, which naturally explains the opacity distribution. Our most preferred model is that the C ring has been continuously polluted by meteoroid bombardment since it first formed 15-90 million years ago, while the middle C ring was further contaminated by an disrupted Centaur 10-20 million years ago. We derive the silicates fractions in the B ring, which has a significant dependence on the assumed porosity, but the radial distribution follows the same trend as the optical depth. Owing to the B ring’s high opacity (i.e. high optical depth but low surface density), its particles are likely to have 85%-90% porosity, with corresponding silicates fractions of ~ 0.3% - 0.5% in the inner and outer B ring, and ~0.1% - 0.2% in the middle regions. For the A ring interior to the Encke gap, the derived silicate fraction is ~0.2% - 0.3% everywhere for porosities ranging from 55% - 90%. Finally, our results for the Cassini Division indicate a silicates fraction of ~1% - 2% similar to most regions in the C ring, except that the Cassini Division particles are more likely to contain ≳ 90% porosity due to its high opacity. We find that the overall pollution exposure time for the A and B rings and the Cassini Division ranges from ~40 - 150 Myr, which is in line with the ~15 – 90 Myr in the C ring. Our results support the idea that Saturn’s rings may be ≲ 150 Myr old suggesting an origin scenario in which the rings are derived from the relatively recent breakup of an icy moon. The multi-wavelength VLA observations confirm the high porosity in the C ring particles and the presence of a “hot band” in the middle C ring. In the intramixure model, our multi-wavelength study suggests a corresponding decrease in the imaginary part of the silicates dielectric constant at higher frequencies. However, we do not see evidence for such decrease in the B ring particles. The results support the idea that the silicates in middle C ring has different origin source from meteoroid flux or that the middle C ring particles are more likely to be described by the core-mantle model which naturally matches observations at all wavelengths. Finally, the silicates fraction in the B ring is consistent with that derived from Cassini observations, less than 1%. We confirm that the B ring particles are likely to be over 80% porous, which at the same time explains the high opacity in the B ring measured by density waves.