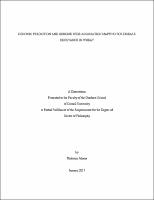 Wheat (Triticum aestivum L.) is one of the major food crops in the world that is grown on more land area than any other commercial crop. The demand for wheat is expected to increase by 60% by 2050 which cannot be met with the current yield gain of 1%. Hence, it is important to evaluate different strategies for increasing the genetic gain in wheat. With this focus, we evaluated two strategies, genomic prediction and genome-wide association studies (GWAS) for disease resistance in CIMMYT’s international bread wheat screening nurseries (IBWSN). Our objective was to compare different prediction models for resistance to leaf rust (LR), stem rust (SR), stripe rust (STR), Septoria tritici blotch (STB), Stagonospora nodorum blotch (SNB) and tan spot (TS) in the 45th and 46th IBWSN entries. The prediction models tested include: Least-squares (LS), genomic-BLUP (G-BLUP), Bayesian ridge regression (BRR), Bayes A (BA), Bayes B (BB), Bayes C (BC), Bayesian least absolute shrinkage and selection operator (BL), reproducing kernel Hilbert spaces (RKHS) markers (RKHS-M), RKHS pedigree (RKHS-P) and RKHS markers and pedigree (RKHS-MP). The 333 lines in the 45th IBWSN and the 313 lines in the 46th IBWSN were genotyped using genotyping-by-sequencing markers. For the rusts, the mean prediction accuracies were 0.74 for LR seedling, 0.56 for LR APR, 0.65 for SR APR, 0.78 for YR seedling and 0.71 for YR APR. For the leaf spotting diseases, the mean genomic prediction accuracies were 0.45 for STB APR, 0.55 for SNB seedling, 0.66 for TS seedling and 0.48 for TS APR. Using genome-wide marker based models resulted in an average of 42-48% increase in accuracy over LS. Overall, the RKHS-MP model gave the highest accuracies, while LS gave the lowest. GWAS was also performed on these traits and several significant markers and candidate genes were identified. We conclude that implementing GWAS and genomic selection in breeding for these diseases would help to achieve higher accuracies and rapid gains from selection.