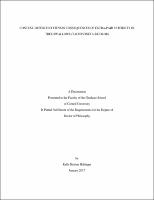 Extra-pair paternity (EPP) – the siring of offspring by a male other than a female’s social partner – is a widespread phenomenon in birds. Researchers have long hypothesized that EPP must confer a genetic advantage to extra-pair offspring (EPO) over their maternal half-siblings (within-pair offspring: WPO), but support for this hypothesis has been definitively mixed. This lack of consensus might have arisen because fitness differences between EPO and WPO are only apparent in some environments. Here, I examine the role that environmental context plays in shaping the relative fitness of Tree Swallows (Tachycineta bicolor) of differing paternity status. In Chapter 1, I manipulated perceived predation risk in a population of breeding adults and monitored survival, growth, and glucocorticoid stress reactivity of their nestlings. I used an alternating block design, in which the treatment applied to each nest box was reversed in successive years of study. In so doing, I discovered that EPO were larger, longer-winged, and heavier than WPO, but only in nests that had been exposed to predators. In the absence of predators, WPO were heavier than EPO, a result that was not predicted by any existing hypothesis that seeks to explain female extra-pair behavior in birds. In Chapter 2, I took advantage of historical banding and nest records, as well as archival DNA, to investigate whether environmental conditions during development influenced the relative probability of recruitment of EPO and WPO into their natal population. I was able to identify several early-life variables that impacted the likelihood of subsequent recruitment, but found no differences in recruitment between EPO and WPO under any set of early-life circumstances. In Chapter 3, I examined long-term fitness outcomes of female swallows of known paternity status who had been born on our site and recruited into the population as adults. I found that WPO survived longer and produced more fledglings than EPO, and that their superior performance was attributable to high developmental plasticity that enabled individuals reared in particularly benign environments to outperform less plastic EPO. Collectively, these findings suggest that EPO and WPO, rather than being of intrinsically different quality, as has often been assumed, may represent alternative reproductive strategies, each of which performs best in certain environments.