MODERN RELIGIOUS MOVEMENTS OF COLONIAL SOUTH ASIA: THE ORIGINS OF REVIVAL AND REFORM 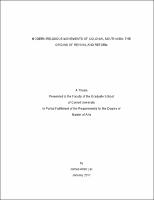 During the British colonial period of South Asia, religious movements such as Buddhist modernism and Hindu nationalism became powerful agents of resistance and change. These developments, shaped by the contrasting influences of Western cultural domination and the pervasiveness of preexisting social formations, proved to be an effective measure in unifying the colonies under a common purpose. By studying the parallel, but individual, progression of these two movements, we see that changing identity formations during the colonial period, were a consequence of a wide array of converging influences. Colonialism, modernity and reverse orientalism all become important factors that affected change. Examining the complexities of religious reform and revival also proves beneficial in determining avenues of resistance. Although colonies such as British India and Ceylon were facing a common subjugation, their responses were solitary and methodologically dissimilar. They used resources distinctly available to them, such as assembly, culture and religion, but in different ways.