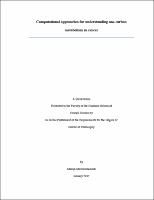 Cancer metabolism is an emerging research area in cancer biology and therapeutics. One of the major metabolic pathways known to play important roles in the pathogenesis of cancer is one-carbon (1-C) metabolism. 1-C metabolism integrates the status of many dietary nutrients as inputs, and in turn regulates a variety of cellular processes including de novo nucleotide synthesis, lipid metabolism, protein biosynthesis, redox metabolism, transsulfuration, and epigenetics. As the regulation of these cellular processes is critical to cells, the tuning of the activity of 1-C metabolism plays important roles in cancer. Previous studies have established implications of genetic and dietary perturbations of multiple components of 1-C metabolism in human cancers. However, the heterogeneity among cancer types and subtypes with respect to the usage and flux distribution of 1-C metabolism has not been systematically quantified. There remain great potentials in deciphering how 1-C metabolism plays different roles in different human cancers, especially since this metabolic pathway is targeted by a number of the existing antimetabolite chemotherapeutic agents. In this dissertation, I quantitatively characterize various aspects of 1-C metabolism across human cancers. I first investigate the between-cancer-type variation in the usage of serine by 1-C metabolism using flux distribution analyses and find substantial heterogeneity. I also show that a common feature across cancers is correlated activation of nucleotide and redox metabolism. Next I assess the link between 1-C metabolism and DNA methylation using computational modeling and machine-learning. I find significant contribution from particular enzymes within 1-C metabolism— such as methionine adenosyltransferases— in explaining the within- cancer-type (inter-individual) variation in DNA methylation. My results provide evidence that misregulation of 1-C metabolism is at least in part responsible for disrupted DNA methylation profiles in tumors leading to epigenetic instability and higher malignancy. Given evidence for the role of 1-C metabolism and the methionine cycle in methylation dynamics, I next evaluate the potential for dietary intervention using the amino acid methionine. To this end, I model human serum methionine levels and quantify the contribution of various factors in determining the concentration of methionine. I discover that dietary factors could together explain nearly 30% of overall variation in methionine concentrations, and also provide evidence that the relationship between 1-C metabolism and methylation exists at physiological concentrations of methionine. Finally, I use a novel approach to identify gene expression markers of tumor response to 5-FU and Gemcitabine —two of the commonly used antimetabolite chemotherapies that target enzymes in 1-C metabolism. I discover that response to these agents is to a large degree determined by the metabolic state of tumors and the expression levels of specific target pathways of each of these agents. Together, my findings provide quantitative information about the heterogeneity among tumors with respect to the usage of 1-C metabolism, and delineate some of the ways this information can be translated into clinical decision- making.