Bullets to Ballots: Maoists and the Lure of Democracy in India 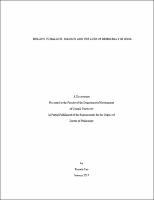 How do insurgents give up arms and return to the same political processes that they had once sought to overthrow? A lot has been written on why men and women rebel, but we know very little about how rebels quit. This dissertation lays out the protracted process of retirement of Maoist rebels through informal exit networks that grow in the grey zones of insurgency-democracy interface in India. Based on fine-grained fieldwork in conflict zones in North and South India, I argue that the biggest fear of retiring rebels is that they could be killed as soon as they disarmed, potentially by their former enemies, by former comrades, or by various state agencies. The state policies for surrender and rehabilitation, however, focus on post retirement livelihood provisions without addressing this apprehension of rebels that hinders retirement. During intimate conversations with the author former rebels complained that while they could possibly lose their lives after disarming, the state would not lose much if retired rebels were killed. This creates a problem of credible commitment, which, I show, is resolved locally by the informal exit networks that flourish in the shadow of grassroots associations of civic participation. These exit networks are locally embedded. I argue that rebel retirement is exceptionally high in the South due to emergence of a harmonic exit network that weaves together multiple stakeholders in conflict zones in an amalgam of roles and alliances in a way that ensures returning rebels survive and reintegrate. In contrast, rebel retirement is low in the North due to emergence of a discordant exit network that exacerbates the fear and anxiety of retiring rebels and stifles their reintegration. I also show that emergence of a specific exit network is contingent on the social bases of insurgency, the strength of vertical and horizontal ties forged by the insurgent organization, and the everyday dynamics of democracy-insurgency interaction.