Crowding the Banks: The Historical Archaeology of Ohagi and the Post-Revolutionary Haudenosaunee Confederacy, ca. 1780-1826. 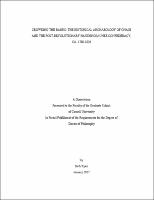 This dissertation examines the settlement pattern, housing styles, subsistence practices, and trade relationships of Haudenosaunee communities in New York State and Ontario in the post-Revolutionary era (1783-1826). Historical and ethnohistorical literature has described the period as one of despair, cultural loss, factionalism, and dependency among the Haudenosaunee Confederacy, and the communities have been labeled as “slums in the wilderness,” confined on small tracts of land and isolated from one another. My excavation at Ohagi, a Tuscarora village in Seneca territory in the Genesee River Valley (ca. 1780-1792), in combination with previously unanalyzed museum collections and a reevaluation of county histories and primary source documents, reveals that the Haudenosaunee communities in post-Revolutionary New York and Ontario built villages in a network of settlement complexes, encircling an area of rich natural resources and facilitating movement between communities and nations. The evidence reveals that housing styles did not immediately shift to European-style log cabins, as often assumed, and the shift to smaller houses did not necessarily accompany a change in matrilineal family structure and relationships. This dissertation employs recent literature on Settler Colonialism to critique both the exiting interpretations of the post-Revolutionary era as well as the practice of archaeological excavation of Native sites.