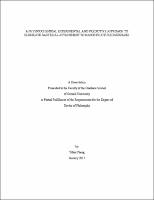 A PHYSICOCHEMICAL EXPERIMENTAL AND PREDICTIVE APPROACH TO ELUCIDATE BACTERIAL ATTACHMENT TO NANOSTRUCTURED SURFACES Yifan Cheng, Ph.D. Cornell University 2017 Prevention of bacterial attachment to various surfaces is of critical importance to areas that directly affect human health and life, including food processing, water treatment, and medicine. The past decade has witnessed a rapid growth in novel antifouling materials, some of them with features at the nanoscale. This work focused on studying the effect of substrate and bacterial physicochemical factors, the nanoscale topography in particular, on bacterial attachment and biofilm formation. In Chapter One, a physicochemical mathematical model was developed for the porous anodized aluminum oxide (AAO) surfaces based on the Extended Derjaguin, Landau, Verwey, and Overbeek (XDLVO) theory. By integrating the electrostatic, acid-base and van der Waals interaction forces over the surface topography of AAO, the adjusted XDLVO model is able to delineate the effect of changing pore diameter, pore depth and surface porosity on the maximum repulsive force (Fmax), which prove to be an effective indicator of tendency for bacterial attachment. The predicted force-distance (FD) curves for a model system consisted of a polydopamine-coated microsphere and various AAO surfaces was verified with atomic force microscopy, showing that total repulsive force was indeed enhanced by the densely distributed pores covering the 15 and 25 nm pore AAO surfaces. In Chapter Two and Chapter Three, the adjusted XDLVO model was validated with a bacterial attachment assay using surrogate strains Escherichia coli ATCC 25922 and Listeria innocua as well as pathogenic strains Escherichia coli O157:H7, Listeria monocytogenes, Staphylococcus aureus and Staphylococcus epidermidis. As predicted by the model, surfaces with 15 and 25 nm pore diameters significantly repressed attachment and biofilm formation by all strains tested. The observed effect was attributed to the repulsive force, primarily electrostatic and acid-base forces, which were greatly enhanced by the large surface area originating from the high density, small-diameter pores. It was also demonstrated how this predictive approach could be used to optimize different elements of surface topography (particularity pore diameter and density) and surface energies for further enhancing the observed bacteria-repelling effect. In Chapter Four, a phenomenon observed near hydrophilic surfaces, also known as particle-exclusion zones (EZ), was studied by exposing Nafion and alumina to bacteria suspensions, including S. aureus, E. coli O157:H7, and L. monocytogenes. Using confocal laser scanning microscopy (CLSM), bacterial cell density distribution in a 3D space near solid-liquid interface was obtained, and a robust image analysis method was developed to generate a quantitative profile of cell concentration near the interface, which allowed the precise quantification of EZ and of a transition zone (TZ), based on pixel intensity profiles. A typical bacterial EZ size of 40 - 60 µm and a TZ of 40 - 80 µm was revealed for bacteria suspended in tryptic soy broth (TSB, pH 7.0, IS ≈ 100 mM). In addition, surface topography appeared to influence EZ and TZ near AAO surface, with the 15 nm pore AAO having the largest combined EZ-TZ size. A robust EZ-TZ region could prove an important antifouling mechanism. Overall, this work provides critical insights on the mechanisms of bacterial attachment to surfaces with nanoscale topography, which can be used for developing biofouling-resistant material surfaces for a wide range of applications sensitive to bacterial attachment and biofilm formation.