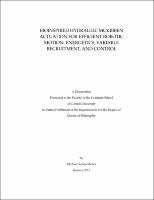 Hydraulic cylinder-driven control systems have become increasingly popular as the means of actuation for human-scale legged robots (such as Boston Dynamics' ATLAS humanoid) and assistive devices (such as Lockheed Martin's HULC exoskeleton) largely due to their high actuator power density. McKibben muscles are also an attractive actuator choice among the robotics community because of their extremely light weight, high force capacity, and low fabrication cost. The vast majority of these actuators are operated pneumatically, enhancing compliance, but resulting in extremely low efficiencies. Powering these actuators hydraulically increases actuator stiffness and allows for roughly double the efficiency. While running the system hydraulically is more efficient than pneumatic operation, efficiency is still one of the largest drawbacks of hydraulic servo-systems, where on average 43\% of the input power is lost to valve throttling. Due to these large losses, one of the biggest limitations of these robots is their run time untethered from a power source. This dissertation aims to improve actuation efficiency in order to enable a greater range for mobile robots. First, the transduction efficiency of McKibben muscle actuators is characterized, and is increased through the use of higher bulk modulus fluids, inelastic bladders, and higher pressures. Through these modifications, the transduction efficiency is increased from 27\% for a pneumatic latex bladder McKibben muscle, to 80\% for a hydraulic low density polyethylene bladder McKibben muscle. Next, a real-time variable recruitment actuation scheme is implemented on a bundle of parallel McKibben actuators for the purpose of reducing servovalve throttling losses. This strategy minimizes fluid power consumption by selectively activating the minimum number of McKibben actuators required by the load, and is inspired by multiple motor unit summation in skeletal muscle. Over the range of loads tested on the proof-of-concept bundle, variable recruitment is shown to increase actuation efficiency from 39\% to 57\% compared to a throttling only approach. Lastly, an improved angular position controller for the hydraulic McKibben actuators is formulated via a cascaded PI(angular feedback)-P(pressure feedback)-controller with feedforward compensation. The feedforward term provides anticipative action through a McKibben flowrate model and valve flow gain. This controller increases system bandwidth and reduces settling times. These control techniques are then discussed within the context of enhanced variable recruitment control, and overall future directions for improving system efficiency are considered.