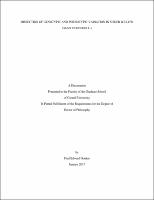 Salix spp. and hybrids (shrub willow) are bred as dedicated bioenergy crops around the world, however there is still untapped potential for genetic improvement. Salix is a widely adapted and genetically diverse genus, but few studies have utilized this diversity for trait mapping or development of genomic tools. The studies of this dissertation focused on S. purpurea, a core reference species for breeding shrub willow bioenergy crops in North America, to understand the genetic basis for key traits and identify quantitative trait loci (QTL) that can be utilized for marker-assisted selection (MAS). A genetically diverse germplasm collection of 110 accessions from the Northeastern US was assembled, genotyped using genotyping-by-sequencing (GBS) and extensively phenotyped for key biomass, morphological, phenological, physiological, physical and chemical wood properties, and disease resistance across three years and three replicated experimental sites. The association population was further expanded through the addition of 157 accessions from Europe. Population genetic analysis revealed significant population stratification, subpopulation structuring and differentiation corresponding mainly to geographic regions. Phenotypic analysis of the US population showed wide variation among genotypes and revealed a majority of traits to be sexually dimorphic in favor of male plants including yield, but also a female biased sex-ratio. This suggests that the sex determination locus in Salix may be linked to loci responsible for growth and fitness. The natural phenotypic variation of the US population was evaluated in a genome-wide association study (GWAS), which revealed several candidate genes for high biomass yield and traits significantly correlated to yield, as well as resistance to Melampsora rust. The studies conducted here advance the understanding of traits contributing to increased biomass in woody plants, lay the groundwork for validating the underlying genes, and will contribute to the development of marker-assisted selection and genomic selection to accelerate the efficiency and accuracy of breeding.