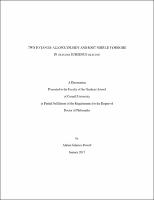 Polyploidy (or whole genome duplication) and root nodule symbioses with bacteria (termed ‘rhizobia’) have both been important phenomena in the evolutionary history of the legume family (Leguminosae). Recently, it has been proposed that polyploidy may have played a critical role in the development or refinement of nodulation. Given the varied potential impacts of polyploidy, effects on biotic interactions are plausible. However, direct studies of the interactions between these phenomena in symbiotic, nodule-forming species are lacking. In this dissertation, using a complex of recently formed allopolyploids in Glycine subgenus Glycine, the perennial relatives of soybean, we examined (1) the root metabolites and symbiotic signaling capacity of multiple allopolyploid species relative to the diploid progenitor species that hybridized to form each allopolyploid, (2) the nodulation-related responses of allopolyploids and diploid progenitors to rhizobia and (3) the transcriptome-level responses to inoculation in allopolyploid G. dolichocarpa (T2) and its diploid progenitors. These objectives were pursued using a variety of approaches including root metabolite profiling, inoculation trials, and RNA sequencing. We found that, while there were no common transgressive patterns in the root metabolite profiles of allopolyploids in the complex, one of the progenitors of T2 had distinctive root metabolite and exudate profiles; profiles of symbiotic signaling metabolites were also altered in the allopolyploid. In addition, T2 demonstrated an enhanced symbiotic capacity when inoculated with rhizobia compared to its diploid progenitors. Finally, transcriptomic analyses revealed patterns of non-additive expression in T2, with evidence of transcriptional responses to inoculation that were distinct from one or both progenitors and that highlighted differences in hormonal signaling responses. Taken together, our findings highlight effects of hybridity, and the properties of diploid progenitors, in determining the symbiotic capabilities of allopolyploids in Glycine subgenus Glycine. However, the combination of features from progenitors can enhance symbiotic responses in allopolyploids in ways that deviate from expectations of additivity. Such effects provide potential explanations for the apparent abilities of allopolyploids in Glycine subgenus Glycine to colonize novel habitats beyond their native ranges.