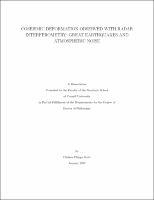 Spatially dense maps of coseismic deformation derived from Interferometric Synthetic Aperture Radar (InSAR) datasets result in valuable constraints on earthquake processes. The recent increase in the quantity of observations of coseismic deformation facilitates the examination of signals in many tectonic environments associated with earthquakes of varying magnitude. Efforts to place robust constraints on the evolution of the crustal stress field following great earthquakes often rely on knowledge of the earthquake location, the fault geometry, and the distribution of slip along the fault plane. Well-characterized uncertainties and biases strengthen the quality of inferred earthquake source parameters, particularly when the associated ground displacement signals are near the detection limit. Well-preserved geomorphic records of earthquakes offer additional insight into the mechanical behavior of the shallow crust and the kinematics of plate boundary systems. Together, geodetic and geologic observations of crustal deformation offer insight into the processes that drive seismic cycle deformation over a range of timescales. In this thesis, I examine several challenges associated with the inversion of earthquake source parameters from SAR data. Variations in atmospheric humidity, temperature, and pressure at the timing of SAR acquisitions result in spatially correlated phase delays that are challenging to distinguish from signals of real ground deformation. I characterize the impact of atmospheric noise on inferred earthquake source parameters following elevation-dependent atmospheric corrections. I analyze the spatial and temporal variations in the statistics of atmospheric noise from both reanalysis weather models and InSAR data itself. Using statistics that reflect the spatial heterogeneity of atmospheric characteristics, I examine parameter errors for several synthetic cases of fault slip on a basin-bounding normal fault. I show a decrease in uncertainty in fault geometry and kinematics following the application of atmospheric corrections to an event spanned by real InSAR data, the 1992 M5.6 Little Skull Mountain, Nevada, earthquake. Finally, I discuss how the derived workflow could be applied to other tectonic problems, such as solving for interseismic strain accumulation rates in a subduction zone environment. I also study the evolution of the crustal stress field in the South American plate following two recent great earthquakes along the Nazca- South America subduction zone. I show that the 2010 Mw 8.8 Maule, Chile, earthquake very likely triggered several moderate magnitude earthquakes in the Andean volcanic arc and backarc. This suggests that great earthquakes modulate the crustal stress field outside of the immediate aftershock zone and that far-field faults may pose a heightened hazard following large subduction earthquakes. The 2014 Mw 8.1 Pisagua, Chile, earthquake reopened ancient surface cracks that have been preserved in the hyperarid forearc setting of northern Chile for thousands of earthquake cycles. The orientation of cracks reopened in this event reflects the static and likely dynamic stresses generated by the recent earthquake. Coseismic cracks serve as a reliable marker of permanent earthquake deformation and plate boundary behavior persistent over the million-year timescale. This work on great earthquakes suggests that InSAR observations can play a crucial role in furthering our understanding of the crustal mechanics that drive seismic cycle processes in subduction zones.