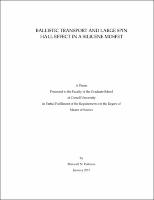 In an effort to surmount the issues that arise when attempting to scale transistors down to the low nanometer regime, the use of two-dimensional materials in transistors is regarded as a possible solution. One such material, silicene, has garnered much attention recently due to its unique properties and compatibility with current silicon-based technology. Silicene is a silicon analog of graphene in which a monolayer of silicon atoms forms a honeycomb structure. Therefore, silicene contains many of the properties of graphene. However, due to it's buckled structure and larger spin orbit coupling, silicene has a gapped band structure. Moreover, application of an electric field perpendicular to the silicene plane has been shown to induce band splitting and band gap manipulation. In this thesis, the reported electronic and topological properties of silicene are investigated using a low-energy effective Hamiltonian. It is confirmed that silicene's band structure is strongly manipulated by the application of a vertical electric field. Furthermore, by calculation of the Z2 topological invariant, it is confirmed that when the electric field surpasses a critical value silicene transitions from topological insulator to band insulator. The use of silicene in a ballistic independent double gate field effect transistor is also modeled. It is found that while the drain current exhibits the current saturation expected of a field effect transistor, the use of asymmetric gate voltages generates a transverse spin current perpendicular to the drain current. The spin current is found to have a switching capability, depending on whether the vertical electric field generated by the asymmetric gate voltages is greater than or less than a critical value. This property is very interesting and could have spintronic applications.