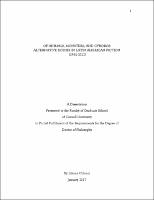 This work draws from animal studies, biopolitics, and posthumanism to explore the ways in which the body is simultaneously inscribed and erased in seven Latin American texts from the last fifty years: from João Guimarães Rosa’s “Meu tio o Iauaretê” (1961) to Martín Felipe Castagnet’s Los cuerpos del verano (2012), and including Sara Gallardo’s Eisejuaz (1971), Jorge Baron Biza’s El desierto y su semilla (1998), Mario Bellatin’s Flores (2000), Miguel Esquirol’s “El Cementerio de Elefantes” (2008), and Rafael Pinedo’s Subte (2012). In these novels and short stories the body is the place where issues of race, sexuality, and ethnicity are negociated and contested: I focus on the figures of the animal, the monster, and the cyborg as bodies that escape the confining limits of a white, rational, and heterosexual normativity modeled after modern and contemporary Western ideals. In all these narratives, the marginalized body helps to destabilize binary concepts such as nature/culture, human/animal, normal/abnormal, civilization/barbarism, and is the springboard from which biological life —instead of the usually dominant logos– is able to generate a field of affect, estrangement, or resistance which can be influential in the creation of alternative communities. In the aforementioned cases, the animal sign is instrumental in thinking on those bodies —whether they are sick, disabled, queer, poor, marginalized, female, indigenous, minority— that do not conform to an hegemonic image of Man.