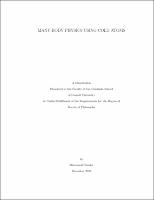 Advances in experiments on dilute ultracold atomic gases have given us access to highly tunable quantum systems. In particular, there have been substantial improvements in achieving different kinds of interaction between atoms. As a result, utracold atomic gases oer an ideal platform to simulate many-body phenomena in condensed matter physics, and engineer other novel phenomena that are a result of the exotic interactions produced between atoms. In this dissertation, I present a series of studies that explore the physics of dilute ultracold atomic gases in different settings. In each setting, I explore a different form of the inter-particle interaction. Motivated by experiments which induce artificial spin-orbit coupling for cold fermions, I explore this system in my first project. In this project, I propose a method to perform universal quantum computation using the excitations of interacting spin-orbit coupled fermions, in which effective p-wave interactions lead to the formation of a topological superfluid. Motivated by experiments which explore the physics of exotic interactions between atoms trapped inside optical cavities, I explore this system in a second project. I calculate the phase diagram of lattice bosons trapped in an optical cavity, where the cavity modes mediates effective global range checkerboard interactions between the atoms. I compare this phase diagram with one that was recently measured experimentally. In two other projects, I explore quantum simulation of condensed matter phenomena due to spin-dependent interactions between particles. I propose a method to produce tunable spin-dependent interactions between atoms, using an optical Feshbach resonance. In one project, I use these spin-dependent interactions in an ultracold Bose-Fermi system, and propose a method to produce the Kondo model. I propose an experiment to directly observe the Kondo effect in this system. In another project, I propose using lattice bosons with a large hyperfine spin, which have Feshbach-induced spin-dependent interactions, to produce a quantum dimer model. I propose an experiment to detect the ground state in this system. In a final project, I develop tools to simulate the dynamics of fermionic superfluids in which fermions interact via a short-range interaction.