CONTROLLING CARBON SURFACES WITH PORES AND COATINGS FOR ENERGY APPLICATIONS 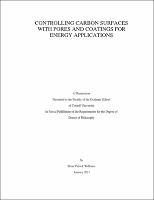 In the past decade new and complex methods were developed to create hierarchically porous carbon materials which have found applications in areas such energy storage, catalytic supports, and adsorbents. Carbon is used in these applications because it can have both high surface area and high conductivity but remain relatively inert. Due the versatile nature of carbon chemistry, there are dozens of precursors and methods to create porous carbon from soft and hard templating and post-treatments to modify the surface chemistry. However a majority of these templating techniques can be slow and difficult processes. As such it is desirable to develop simple methods to maintain control over hierarchical pores and the corresponding surface chemistry. In a series of projects, the carbon surfaces were modified with pores and coatings for various energy applications. First, carbon in the form of petroleum coke, was modified by physically adsorbing ionic and nonionic polymers onto the surface to disperse and stabilize the particles in slurry for gasification. Atomic force microscopy, adsorption isotherms, and rheology were used to show the nature of the dispersion, stabilization, and yield stress of the slurry. Second, carbon with tunable hierarchical pores was developed for use as an interlayer in lithium sulfur batteries and tested for high rate capacity. The mesoporous carbon was produced from electrospinning immiscible blended polymers and subsequent heat treatments. The macro- and micro- pores are a natural product of the electrospinning and heat treatments. A fundamental study of the overall sulfur loading and the thickness of the interlayer was also conducted. Finally, large hierarchical mesopores were tested as zinc bromine redox flow battery cathodes and modified with metal oxide coatings. The effect of pore size on rate capabilities is considered again as well as the catalytic, adsorptive, and protective effects of the metal oxide coating.