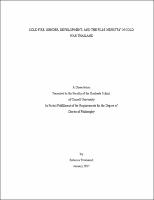 Cold Fire is a study of how the international film industry in Thailand became a productive site for expressions of gendered cultural nationalism from the 1950s to the 1970s. National development projects expanded both state power and commercial markets for foreign and domestic film distribution. Those changes were facilitated by the domestic rise of military authoritarianism, intensive US political and economic intervention, rapid industrialization, and the communist threat in Asia. The United States and Thai governments used film as an instrument of psychological warfare to propagate conservative representations of Thai culture and society aimed at combating Communist sympathy. In doing so, they produced gendered representations of political behavior. Political consciousness was a masculine threat to the state. Thai women were positioned as inherently non-political, and therefore impervious to the threats of communism. The core values of Thai society promoted during this period, namely loyalty, passivity, and peacefulness, were implicitly feminine. Meanwhile, a new generation of filmmakers drew on the international discourse of modernization theory to promote technological advancement in Thai national cinema. The movement also articulated popular concerns, particularly towards the expanding presence of the United States and commercial development of the countryside. With the importation of commercial popular culture promoting alternative models for women and the visibility of prostitution alongside military bases, elite expressions of Thai femininity were used to delineate national difference in opposition to the United States. As such, Thai women were viewed as deeply vulnerable to the threat of Americanization. Indeed, government censors and filmmakers alike increasingly focused on representations of gender and sexuality in commercial films. With the 1970s, a small group of filmmakers brought to prominence a conservative national cinema that drew on elite notions of a romanticized agrarianism and traditional femininity to assert an image of Thai authenticity. I therefore argue that during the Cold War communism and Americanization functioned as mutually constitutive threats within a gendered Thai political and social discourse. Cinematic regulation and representation of Thai women as wives, mothers, lovers, and prostitutes produced the gendered boundaries of the modern state. National cultural identity was predicated on women’s unique and unequal status.