Origins of temperate adaptation in maize 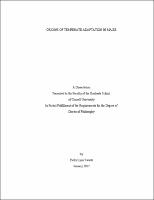 Four thousand years ago, maize began migrating out of Mexico and into the geographically diverse Southwestern US (1, 2). Maize spread quickly through the lowland deserts, but full maize agriculture in the uplands lagged for another 2,000 years (1, 3). Why did maize agriculture fail to fully develop, despite the persistent presence of maize in the uplands? I tested the hypothesis that early maize in the Southwest US was not adapted to the uplands, specifically testing archaeological maize from the uplands at the beginning of agricultural intensification for early flowering. To better understand temperate adaptation in maize, I led a project to generate tools for accurate imputation and projection of maize inbred haplotypes onto related individuals. We then projected whole genome sequence onto five diverse modern inbred maize populations to further elucidate the genetic architecture of maize flowering through mapping, machine learning and cross population predictions. We find that the genetic architecture of flowering is tightly linked to the temperate-tropical differentiation in American germplasm for four of the five populations, and suggest an independent temperate adaptation occurred in China after 1500. We also find that populations with individuals across the North American temperate adaptation predict others well. We further test that good cross population prediction extends to modern Southwestern landraces by developing a mapping population for flowering time, and show that modern inbred populations can predict divergent modern landraces with high prediction accuracy for days to flowering. We extend flowering predictions to archaeological maize samples dating to the early period of agricultural adoption, and find that this population was already adapted. Using SNPs with the greatest population differentiation over the extremes of temperate-tropical adaptation, we find that temperate adaptation happened in situ in the Southwest, and early southwestern peoples selected on primarily standing variation. 1. J. B. Mabry, ed. Las Capas: Early Irrigation and Sedentism in a Southwestern Floodplain (Center for Desert Archaeology, Tucson, 2008), Anthropological Papers. 2. E. K. Huber, in Fence Lake Project (Statistical Research Inc., Tempe, 2005), vol. 1: Introduction and Site Descriptions of Technical Series. 3. R. G. Matson, B. Chisholm, Basketmaker II Subsistence: Carbon Isotopes and Other Dietary Indicators from Cedar Mesa, Utah. Am. Antiq. 56, 444–459 (1991).