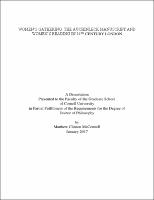 Women’s Gathering argues that MS Advocates 19.2.1 (Auchinleck) provides key evidence for understanding the early 14th century London literary scene that fostered Chaucer. Reading Chaucer and the Auchinleck side by side, I show that the manuscript’s sustained concern about women’s agency mirrors Chaucer’s, and that the complexity with which Chaucer treats that agency can be found in the Auchinleck too. Furthermore, I argue that the similarity is not due to a direct line of influence between manuscript and author, but stems from a mutually shared 14th century London literary microculture. The introduction argues that the Auchinleck scribes performed the process of textual collocation as a consciously literary act of gathering, not simply as a collection in a material object. Their collocation of texts spanning multiple genres informs our understanding of their own scribal activity and of Chaucer’s. This in turn requires that we acknowledge the London literary culture of the early—and not just of the late— fourteenth century for its contributions to our understanding of the romance genre, and of women’s relationship to it. Particularly with the texts that focus on women as agents in history and narrative, I argue that the manuscript genders the reading practices of its 14th century audience and is thus predicated on reading practices that circumscribed 14th century femininity. The dissertation therefore has stakes in the literary history of romance, the development of English as a literary language, and the history of women’s relationship to literature. Chapter one uses Chaucer to reconsider romance’s peculiar relationship to women and their reading in the early and late 14th century. In Troilus & Criseyde, romance is a source of vicarious experience, but one gendered feminine by its association with language and audience. With the Tale of Sir Thopas, Chaucer gendered the pilgrim Chaucer feminine by associating himself with English romance. And finally, the Nun’s Priest’s Tale satirizes the masculine “victory” over women and their texts by provoking Harry Bailey to reveal his own artificially inflated masculinity. In its study of the Auchinleck, this chapter shows that Chaucer’s understanding can be extrapolated backwards in time, demonstrating the conceptual similarities between Chaucer’s romance genre and that of the Auchinleck scribes. Chapter two argues that the Auchinleck rewrites British history as a struggle against transgressive females, processing the recent political trauma of Edward II's deposition by his wife, Isabella of France. Where prior versions of insular history more closely follow Geoffrey of Monmouth's Historia Regum Britanniae, the Auchinleck's Liber Regum Angliae breaks tradition by inscribing transgressive women into the standard narrative. Brutus, the patriarchal namesake of Britain and founder of male order, is hemmed in on either side by female representatives of chaos, Albin and Inge. These two show show that the redactor of the Auchinleck’s Liber was deeply concerned with women’s agency in the political sphere, and sought to trouble the London understanding of what had happened in the 1320s. The Auchinleck as a collection should therefore be understood as a response to women’s agency in recent English history, an agency that in the Liber’s view, needed to be reined in. Chapter three examines two romances, The King of Tars and Sir Degare, and the pseudo-saint’s life The Legend of Pope Gregory, to show that texts in multiple genres both deny and allow women agency by overdetermining their role in reproduction. Particularly births that come about by extraordinary couplings—interreligious, interracial, incestuous, or supernatural—express an ambivalent relationship to women’s self-determination. Women's bodies conceiving by couplings outside of Christian marriage, or within taboo degrees of consanguinity, makes them a nexus of anxieties, a site of promiscuous ideological recombination that threatens—or promises—to unmake social, religious, or political order. The manuscript thus gathers a set of texts in multiple genres that allow women a measure of alienated power through childbirth—not yet the direct claim to agency made by the Wife of Bath, but a sustained consideration of women's agency nevetheless. The romance genre and its adjacent popular genres were thus capable of augmenting the critique of women’s agency that chapter 1 locates in Scribe 1’s use of the Liber Regum Anglie. Chapter four argues that both Chaucer and the Auchinleck participate in a London literary tradition of rivalry between women and clerks. In the Auchinleck, this rivalry is fixated upon the desirable (in)visibility of Mary’s female form. Hou Our Leuedi Sauter was Ferst Founde tantalizes with the proposition that the Virgin Mary will remain unclothed until we say our daily prayers, while The Clerk Who Would See the Virgin suggests that a peek at Mary's body might cost us vision in one eye. The transgressive clerks who peek at Mary nevertheless remain in her good graces through apology. Transgression and apology, as topoi, are reading practices made concrete in the material object of the manuscript as well as fictionally inscribed in Jankyn's “Book of Wikked Wyves.” Chaucer thus elaborates on reading practices that were already well established in the Auchinleck by the time he wrote the Canterbury Tales. Finally, in concluding the argument, I examine the little known Auchinleck Life of Adam & Eve, in which Eve commissions the very work in which her life is inscribed. Eve’s alienated agency, her inability to write her own story, expresses the situation of women who commissioned texts from scribes in the early 14th century. Unable to produce texts themselves, women in the early 14th century need their “sons” to do it for them. The clerkly Seth mediates between Eve and text, homologous to the mediation between London clerk and his female customers. The dissertation thus ends with a reflection on how the readings in the preceding chapters must affect our understanding of London reading culture in the 14th century.