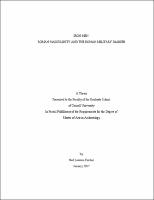 The Roman military dagger, or pugio, is an understudied weapon. Scholars have largely disagreed on the use of the weapon, but most acknowledge that the pugio functioned as more than a tool, military adornment, and weapon. Soldiers might have used the pugio to demonstrate their capacity for violence and thus express their masculinity. This thesis investigates the pugio through archaeological and historical methodologies, through a study of iconographic representations of the pugio, archaeological evidence, and classical sources. The pugio is depicted on grave stelae of common soldiers but not on those of officers or high-ranking Romans, perhaps due to differences in the way these groups constructed male identity. Also, the pugio appears in rivers throughout Northern Europe, a depositional pattern examined using a chi-squared test. The appearance of the pugio in these rivers could be linked to expressions of Roman masculine virtues, as soldiers interacted with local populations.