Why Muslim Women Are Reinterpreting the Qur`an and Rethinking Hadith: A Transformative Scholarship‐Activism 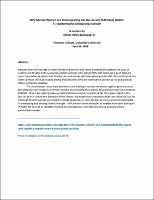 Because the true message of Islam concerning women was rarely practiced throughout the past 14 centuries of Muslim history, women scholar‐activists who self‐identify with Islam have been taking it upon themselves to reinterpret the Qur`an and change attitudes about gender. But their writings do not seem to reach those politicized mostly male Muslims who are running the present social and political affairs in Muslim societies. To the contrary, these male extremists are leading a counter‐revolution against gender justice by taking Qur`anic verses out of their context and misusing the Prophet Muhammad reported narratives (Hadith). Thus, I am making wake‐up calls to Muslim women to stand up for their given rights in the Qur`an and to rethink the authority of the Hadith, especially those narratives that contradict the Qur`an. Although Muslim women are majority college graduates in most Muslim societies, only few participate in developing and shaping Islamic thought. I will present some examples to analyze how basic principles of Islam are re‐read to facilitate building an androgynous, civic attitude among young Muslims, particularly females.