Look before you leap: Visual navigation and terrestrial locomotion of the intertidal killifish Fundulus heteroclitus 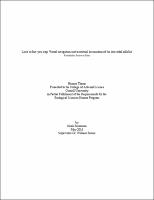 Mummichogs (Fundulus heteroclitus; Cyprinodontiformes) are intertidal killifish that can breathe air and locomote on land. Our goals were to characterize the terrestrial locomotion of mummichogs and determine their method of navigation towards water in a terrestrial environment. We used high-speed video to record behavior during stranding experiments and found that mummichogs use a tail-flip jump to move overland, similarly to other Cyprinodontiformes. However, mummichogs also prop themselves upright into a prone position between each jump, a previously undescribed behavior. After becoming prone, mummichogs rotate about their vertical axis, directing the caudal fin towards the water. Then, they roll back onto their lateral aspect and use a tail-flip behavior to leap into a caudally-directed, ballistic flight path. We conducted experiments to determine the sensory stimulus used to locate a body of water by placing mummichogs on a square platform with one side adjacent to a sea table. Under artificial light, mummichogs moved towards the sea table with a higher frequency than towards the other sides. Under dark conditions, mummichogs did not show a preference for moving towards the sea table. When the surface of the water was covered with reflective foil, mummichogs moved towards it as if it were a body of water. These results suggest that mummichogs primarily use visual cues, specifically reflected light, to orient towards the water. The uprighting behavior that mummichogs perform between terrestrial jumps may provide an opportunity for these fish to receive visual information that allows them to safely return to the water.