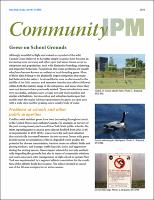 Although beautiful in flight and valued as a symbol of the wild, Canada Geese (referred to hereafter simply as geese) have become an increasing issue on lawns and other open turf areas. Geese occur as subspecies and populations, each with distinctive breeding, wintering, and migratory behaviors. Populations that cause problems are usually what have become known as resident or local-breeding geese. Most of these birds belong to the physically largest subspecies that many had believed to be extinct. Scattered flocks were re-discovered in the middle of the 20th century, and extensive introduction efforts followed within both the historic range of the subspecies, and areas where they were not known to have previously existed. These introductions were very successful, and geese now occupy not only most marshes and similar wild habitats, but also urban and suburban landscapes that readily meet the major habitat requirements for geese: an open area with a wide view, turf for grazing, and a nearby body of water.