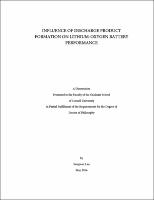 The Li-O2 battery is a promising electrochemical energy storage platform for transportation applications due to its high theoretical specific energy of 3260 W h kg[-]1 . However, several problems must be solved before it can be developed commercially. We identify the Li-O2 cell's most pertinent problems as those that are the direct result of the discharge product, Li2 O2 . In particular, Li2 O2 deposits as an electrically insulating solid in the cathode, which can limit the transport of oxygen and electrons, both of which are essential for the cell's operation. By using a combined experimental and theoretical approach, we find that oxygen transport limitations are insignificant compared to electron transport limitations. Furthermore, electron transport limitations are manifested in a complex manner, as demonstrated through a model in which Li2 O2 nucleate and grow as discrete particles on the cathode surface. The potential drop at the end of discharge coincides with the complete coverage of the cathode surface, indicating that the overpotential gained during discharge is the kinetic overpotential of the oxygen reduction reaction rather than an ohmic overpotential through the Li2 O2 bulk. Increasing the current density is shown to decrease the capacity by increasing the nucleation rate, leading to faster crowding of the cathode surface. An improved understanding of Li2 O2 formation can instruct effective strategies for improving the capacity and rechargeability of the Li-O2 cell. Methods to improve capacity are proposed based on the general strategy of reducing the nucleation rate. With a molecular dynamics simulation, we show that solvents that coordinate with Li+ , such as tetraglyme, can form a steric barrier against the deposition of O2 - , the precursor to Li2 O2 . An open-structure cathode material, vapor grown carbon fiber (VGCF), is demonstrated to exhibit a high discharge capacity despite its low surface area, as indicated by the formation of Li2 O2 particles up to 4 [mu]m in diameter. By coupling a diffusion model to the Li2 O2 nucleation and growth model, we show that VGCF can provide access to a greater volume of electrolyte for LiO2 to diffuse in, which effectively reduces the rate of nucleation by reducing the rate at which the nucleating species accumulates near the surface. The formation of Li2 O2 particles also provides clues to the origins of capacity fade during cycling. Large Li2 O2 particles can electronically isolate carbon particles from the cathode, thus reducing their surface area. We use electrochemical impedance spectroscopy to show that the effective capacitance of the cathode, which is proportional to its surface area, decreases as a function of the number of cycles passed. VGCF is able to resist electronic isolation, achieving both a stable reversible capacity of 630 mAh g[-]1 and a stable capacitance value after 35 cycles. To address the rechargeability of Li2 O2 particles that are larger than the electron transport length, we study the use of soluble redox mediators. Preliminary experiments show that the depletion of redox activity over time is a challenge that must be overcome to make redox mediators work in a practical Li-O2 cell.