Effect Of Various Ceramic Precursors On The Mechanical, Thermal, And Electrochemical Properties Of Polymer/Ceramic Nanofiber Separators For Lithium Ion Batteries 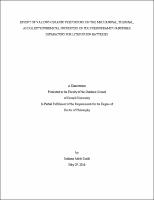 Researchers have been incorporated ceramics into porous membrane separators as a way to improve their mechanical, thermal and battery performances. However, the inclusion of preformed ceramics within the polymer membrane can require multiple additional steps. Current methods of ceramic particle inclusion in the polymer network can lead to issues of particle aggregation which can leads to non-uniform membrane performance. Ceramics present on the surface can delaminate from the surface, which would negatively affect the membrane performance. For this study, we aimed to incorporate room temperature curable liquid ceramic precursors into polymer networks to fabricate polymer/ceramic hybrids in a single electrospinning step. First, we combined polyacrylonitrile (PAN) and organopolysilazane (OPSZ) to successfully create polymer-ceramic membranes without the need for further post-treatment. We varied the amount of ceramic precursor added to investigate the effect of ceramic loading on membrane properties and its electrochemical performance. Results show that with increasing as the amount of ceramic, there is an improvement in the mechanical strength and thermal stability of the membranes. There is also an increase in ionic conductivity with increased ceramic inclusion as the presence of the ceramic disrupts the polymers ability to crystallize. The increased ionic conductivity correlated to an increase in battery performance and capacity retention especially at high charge/discharge rates. We note that all nanofiber based separators in the current study have the similar porosity around 80%, and they exhibit a wide range of the rate iii capability performances due to their different internal and surface morphologies of nanofibers which in turn affect the ionic conductivity. We then used various organopolysilazanes with different ratios of tetraethyl orthosilicate (TEOS) pendant chain to polysilazane backbone to investigate the effect of ceramic structures on the membrane performance. Our results demonstrate that changing to the TEOS to polysilazane ratio can affect that the ceramics ability to form a continuous network within the polymer at the same concentration. The ability to form continuous network increases the amorphous regions within the polymer network, leading to an increase in the ionic conductivity which in turn leads to better battery performance. We note that using OPSZ shows an approximately 5 nm ceramic sheath layer forms on the fibers. In order to investigate the effect of this ceramic sheath layer, we incorporated various silica precursors which resulted in various polymer-ceramic morphologies, ranging from no sheath layer,partial sheath layers, and to full shear layer on the polymer/ceramic fibers. Our results reveal that the presence of ceramic sheath layer leads to better membrane-electrolyte interaction which caused the increase in electrolyte uptake and ionic uptake. Additionally, the ceramic on the sheath layer can aid in preventing the buildup of fluorine based particles on the surface on the fiber, leading to improved capacity retention. iv