Toward An Aesthetic Of Gay Culture 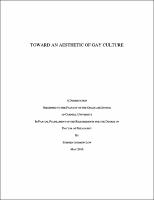 Toward an Aesthetic of Gay Culture analyzes various gay cultural phenomena to argue that the aesthetic of theatricality distinguishes contemporary gay cultural practice in the West. By identifying theatricality, a concept studied in both performance studies and cultural studies, as the central aesthetic feature of gay cultural practice, my dissertation disrupts the assumed correlation between gay identity and gay culture. Extending the analysis provided by David Halperin's How To Be Gay, my project argues that the aesthetic structure of theatricality is inherent in the process of recoding heteronormative cultural phenomena to express queer meanings. In this process of recoding, the heteronormative meaning of phenomena is maintained while new meaning are simultaneously produced and communicated. My research builds on the performance theory of Richard Schechner, and defines theatricality as exhibiting a double negation. For example: The interpellation "Girl" commonly used in gay social worlds does not describe its intended audience as belonging to the female sex or the gender "woman," but because this act of interpellation maintains the socially authorized meaning of the word "Girl," the subject being hailed is not-not a "Girl" in so far as feminization has haunted gayness over the course of the twentieth century. By providing an analysis of the dramatic literature and persona of gay icon Oscar Wilde, the style of femininity embodied by transgender artist and gay community darling Nina Arsenault, the erotic masculinity in the artwork of Tom of Finland, and the paradoxical privacy of cruising and public sex, Toward an Aesthetic of Gay Culture surveys an array of artistic and social practices and identifies theatricality as the common aesthetic feature of gay cultural phenomena.