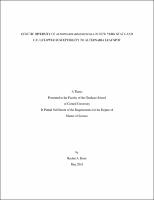 Alternaria leaf spot caused by Alternaria brassicicola is a common disease found on brassica crops in New York State. Management of Alternaria leaf spot can be difficult and little has been known about the pathogen. The goal of the research presented here is to gain a better understanding of host susceptibility and the pathogen population in order to improve management recommendations to growers. Severely infected cauliflower is considered unmarketable and information is needed about the performance of cauliflower varieties in New York State. Twelve commercial cauliflower varieties were evaluated for horticultural traits and susceptibility to Alternaria leaf spot. Differences in yield along with susceptibility to Alternaria leaf spot were found among varieties. In order to better understand the population of A. brassicicola, 49 isolates collected from New York State were analyzed using 10 microsatellite loci and characterized for sensitivity to azoxystrobin, a commonly used fungicide. High levels of genotypic diversity were found and all of the isolates screened were sensitive to azoxystrobin.