Microvesicles And Their Roles In Early Development 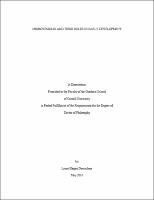 Mouse embryonic stem (ES) cells generate and shed small, vesicular structures from their plasma membranes. These microvesicles (MVs) have emerged as a novel form of intercellular communication with important roles in a variety of biological and pathological processes. Here, I show that ES cells, which are derived from the inner cell mass (ICM) of a blastocyst, communicate with the surrounding layer of trophoblasts using MVs. Two extracellular matrix proteins, fibronectin and laminin, were found to be major protein cargo in these MVs and were shown to interact with integrins expressed on the surfaces of trophoblasts. This resulted in the activation of the signaling proteins FAK and JNK and increased the ability of the trophoblasts to migrate, a critical step during embryo implantation. In fact, injection of MVs generated by ES cells into blastocysts was sufficient to increase their implantation efficiency, highlighting a novel role for MVs in one of the earliest and most important events in pregnancy. In addition to promoting implantation, trophoblasts are essential for placental formation. Interestingly, I determined that trophoblasts generate and shed MVs similar to ES cells, and that the trophoblast MVs are able to impact the behavior of endothelial cells, the cell type that gives rise to the placental vasculature. For example, when incubated with MVs derived from trophoblasts, endothelial cells undergo tubulation and exhibit enhanced survival under nutrientlimiting conditions. Proteomics performed on the trophoblast MVs revealed that they contained a large percentage of metabolic enzymes. Since placental formation involves the extensive   remodeling and formation of blood vessels, which requires a large amount of energy and biomass, these data suggest that the transfer of metabolic enzymes from the MVs to the endothelial cells is important for promoting this outcome.