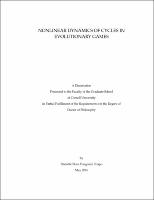 Evolutionary game theorists have devoted a great deal of effort to answering questions related to cooperation. They typically combine game theory with coupled nonlinear differential equations to create an evolutionary dynamic system. Indeed, cooperation, where individuals pay costs to benefit others, is a cornerstone of human civilization. The most common mathematical model used to study evolutionary dynamic systems is the replicator equation: a payoff matrix is defined such that strategies with a payoff above average are more and more prevalent over time while strategies with a payoff below average are less prevalent. Interestingly, many of the dynamics studied using the replicator equation have applications inside and outside the field of of biology, including the dynamics of sociological systems, the evolution of language, fashion, autocatalytic chemical networks, behavioral dynamics, and multi-agent decision making in social networks. Nonetheless, some non-trivial questions have not yet been explored. In our work, we explore the long term nonlinear dynamics of evolutionary dynamical systems with the replicator equation in which agents are allowed to mutate into each other using various graph-theoretic mutation patterns. Additionally, we introduce a minimal mathematical model to investigate which processes or strategies are favored by natural selection in a competitive environment where different levels of resources are available and agents have a choice between making long term rational decisions or quick and effortless decisions that focus on the present.