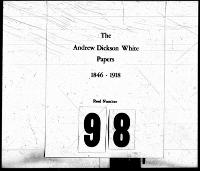 The search for a secretary for the Smithsonian continued. Some letters not addressed to White are included on the date of a trustees meeting, May 16th. There are letters from Gilder and Roosevelt in early May in answer to White's April 18th letter on Gorky. The San Francisco earthquake and its effects at Stanford were noted by John Casper Branner, Jordan, and Isaac Phillips Roberts. On July tenth Jordan wrote about the period of financial peril Stanford had survived. A letter of May 14th encloses an account of the discovery of the legal point on which the success of the Fiske suit rested. A memorandum from Harris on April 28th lists the number of volumes in the collections Fiske gave the Cornell library and an estimate of their value. There are notes from Carnegie in regard to a speech he planned to deliver on Ezra Cornell, and there were proposals to interest him in Illinois College and in Henry A. Ward's meteorite collection.