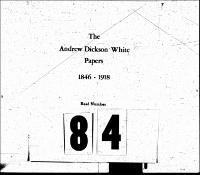 White completed farewell entertaining at the Berlin apartment he was forced to vacate, supervised the packing and disposal of furnishings, and moved out on July fifth. The serious illness of his daughter, the suicide of his son, and the arrangement for the care of his financial affairs by his nephew were the subjects of many letters in the late summer. Andrew Carnegie had recently announced his intention to devote much of his fortune to public benefactions during his lifetime, and Holls and White visited Carnegie's Scottish castle to lay various plans before him. Holls' letter of August 26 and White's of September 20 describe Carnegie and his estate. Holls reported that Carnegie's secretary said that the extra postage on begging letters from America which had been insufficiently paid amounted to nearly three pounds sterling. There are long letters from Jordan on July 25 and Schurman on July eighth. Correspondence to and from New Haven discusses new buildings under construction at Yale and White's objections to them. Burr wrote a thoughtful view of scholarships on July eighth, and on September 16 took White to task regarding the utility of pursuing further theological researches.