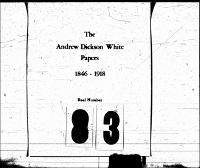 Letters on this reel record the efforts of White and others to obtain donations for Cornell, for a national university at Washington, and for the American Church in Berlin. The men at whom these efforts were directed are Carnegie, Fiske, and Rockefeller. A good deal of intramural disagreement is exposed in letters about a book Holls wrote on The Hague Conferences. There is a sad letter from John Hay on March 12, and on the fourth Henry C. Lea made some cynical comments on republican institutions. Henry T. AIIen wrote two letters from the Philippines, where he became governor of the island of Leyte. There were references to civil unrest in Russia, and E. Burton Holmes wrote White for letters of introduction to friends who could offer him some safety during a visit to Russia to gather material for his travel lectures. Mrs. Leland Stanford wrote twice about faculty difficulties and plans for the future at Palo Alto. From Ithaca the professor in military science asked White to contribute a marksmanship medal to encourage excellence among cadet officers. He said the Boers had shown the value of a large number of riflemen.