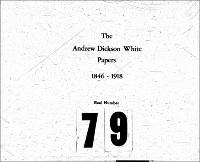 On September 15 White sent the Secretary of State a confidential report on his private efforts with German statesmen to persuade them to join in an arbitration agreement. The tactics of the American military forces in the Philippines came under much criticism. White wrote David Jayne Hill that he thought Nansen wild on the subject of the relations between Norway and Sweden. On December 18 a writer from London predicted that South Africa would become essentially a Dutch Federation, lost to any direct control by Downing Street. A Pole wrote sorrowfully that peace meant overlooking the oppression of Poland, A man from the Pacific Northwest wrote on October 19 asking help in publishing a book which suggested that German immigrants could only be a good second to the Anglo-Saxons in the U.S., and that the Germans should find new territory in South America where German speech, customs and usages could be maintained. There are reports from Berkeley, Cornell and Stanford on college matters. The correspondence contains much political comment, and there are many social and business letters.