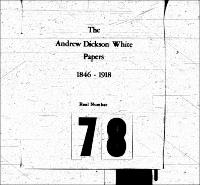 White was sent to the peace conference at The Hague as president of the American delegation, and the conference dominates the correspondence on this reel. There are a number of memoranda he made of private interviews with German diplomats. Preparations for the Grotius ceremony at Delft on July fourth appear, as well as many letters commenting on the event. Affairs at the Berlin Embassy are chronicled in frequent reports from the first and second secretaries during White's absence. Many Americans at this time were critical of McKinley and of the continuation of military action in the Philippines. There was a report on the celebration in New York City of Dewey Day on May first, and on the 13th Joseph May wrote that in Philadelphia ... the populace are war-intoxicated. The name of Dewey is eclypsing that of Washington. There are interesting letters from Tyler and Jordan on this reel, and one from A. O. Leuschner from the University of California concerns a conference of American universities on the status of the Ph.D. degree. A letter from Wincenti Lutoslawski at Cracow University directs attention to the plight of Polish intellectuals.