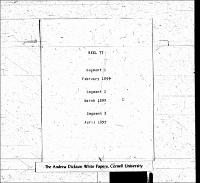 In Berlin White was charged with the delicate task of calming a storm of bad feeling aroused by the press over Germany's role in Samoa. There were calls for peace from many quarters, and the Tsar's proposal stimulated other powers to send representatives to The Hague for a peace conference. There are letters from John Hay, Holls, Stanford Newell, and Seth Low regarding it. A letter from Peking on April 29 gives some insight into the conduct of diplomacy in China. Some Harvard Professors asked White to interest a German opera company in producing an American opera. The Cornell treasurer wrote that the university was selling its New York Central stork and reinvesting in Iowa real estate. A letter on March 20 announced the beginning of a weekly Cornell Alumni News. White had begun work on his memoirs, and exchanged letters with Harper Brothers concerning an agreement covering magazine publication and book rights. There are also notes from Carnegie and Roosevelt. Many friends wrote about the death of Hamilton S. White, a young cousin of White's who had graduated from Cornell and devoted his life to fire fighting. He maintained his own engine and engine house and was considered a local hero in Syracuse.