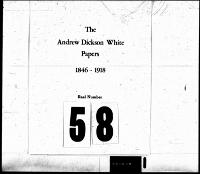 Though he continued to give advice, to make faculty recommendations to a number of educational institutions, and to write and speak on the increase of crime in the United States, White's attention was primarily directed toward diplomatic activity in 1892. His quiet negotiations through Senator Hiscock brought his appointment to St. Petersburg as United States Minister in late July. Much of the correspondence concerned arrangements for his residence in the Russian capital. George Van Ness Lothrop, Charles Emory Smith, and George W. Wurts wrote cordial letters of advice, and several shipping companies sent estimates covering the transfer of household goods. Some American Jewish leaders, who were working with Baron de Hirsch in Europe to help their Russian co-religionists, had supported White's appointment in a direct appeal to the President, and they urged White to look fully into the situation. The official documents of White's appointment were dated August 5. Among letters of congratulation and those dealing with selection of legation personnel are letters from John W. Foster and George Skiras, who had received appointments from President Harrison in recent weeks. There are also notable letters from Eliot, Holls, and Sanborn.See National Archives, Record Group 59 for the official instructions, dispatches, and notes. This material is also available as National Archives Microfilm Publications, Microscopy Nos. 35, 38, 77.