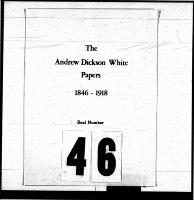 White and his wife traveled in Europe through the summer and early fall, and there were many letters arranging meetings with Burr, the Evanses, and Fiske as well as family letters from Ithaca and Syracuse. The relations between capital and labor were commented upon by Sage on June 20, and in a very different manner on the 28th by Gardiner Greene Hubbard. Ernest Huffcut wrote on August 10 of the difficulty White would face in accepting the Republican nomination for congressman from Democratic Governor Hill's own district. In September Evans wrote, I suppose there is no legislative body in the whole world which contains so many men incapable of forming sound judgments. White wrote on October 29 of Roosevelt's pluck and spirit, and said that even losing he would gain a triumph. White himself was offered an appointment to the Interstate Commerce Commission by President Cleveland, but declined. On his return to Ithaca White did not immediately take an active part in Cornell affairs. President Adams turned over to him many of Architect Henry Van Brunt's letters concerning plans for the library, but he was not named by the trustees to fill a vacancy in the board at their January meeting. That White followed his intention of turning his hand to writing is attested to by the number of letters on the reel from editors and publishers. Some prominent names that appear are Curtis Guild, Henry and Fanny Garrison Villard, and Charles Waldstein. The Syracuse Water Company was being threatened by the formation of a new company, and White, a stockholder, was kept informed of developments by the company president, D. H. Bruce.