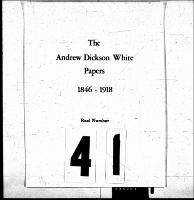 On October 14 White wrote Goldwin Smith that Cornell's best Greek and Latin scholar that term came from Walla Walla, Washington Territory, and that half the new scholarships had been taken by women students. A college of pharmacy was established, and in addition to letters from established departments elsewhere there is a draft of the statute of November 6 that authorized its creation. The proposed enlargement of Sibley College prompted a search for a new professor, and there are a number of lengthy letters discussing the relative qualifications of prominent engineers. On November 7 a student's mother wrote about reports of anti-Semitic feeling on the campus, and an anonymous letter published in The Husbandman on December 10 accused Cornell's president and faculty of irreligious influence. Sculptor W. W. Story wrote on November 25 about the contemplated recumbent statue of Ezra Cornell, and George Washington Custis Lee sent a detailed report on the mounting and housing of a similar statue of his father in Lexington, Virginia. Among political post-mortem letters was a December 6 suggestion from James Fraser Gluck that White run for the United States Senate, and on the 12th Wharton Barker referred to the Senate as a step toward the presidency for White in 1888. White's views were expressed in letters to Burr, Evans and Fiske. There was a bank failure in Syracuse, and White's son began to assume some responsibility for the family's business management. Some notable correspondents were Hermann von Holst and Morris K. Jesup, and there is a brief exchange with the makers of Pond's Extract, which White had long recommended among his friends.