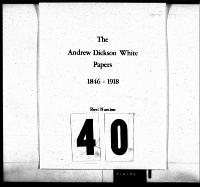 On Nantucket White prepared an open Jetter to Roosevelt in support of Blaine which was printed in newspapers across the country. Several writers sought clarification of White's political judgment, but others applauded his loyalty to the party. During the summer he also wrote a paper to deliver before the first meeting of the American Historical Association at Saratoga. The decision to require all Cornell women students to lodge in Sage College brought indignant and forcefully worded protest from strong minded alumnae, notably from Ellen Coit Brown on July 17. There were many inquiries about scholarship and fellowship requirements as well as the usual number of requests for undergraduate course information. The annual October confrontation between the freshman and sophomore classes was especially tumultuous, and news reports reaching White in New York were far more disturbing than Burr's report from Ithaca. Samuel D. Halliday and Sage wrote White in an effort to dissuade him from strong punitive action. White and his brother were involved in a number of legal complications, and their business holdings suffered in a general recession.