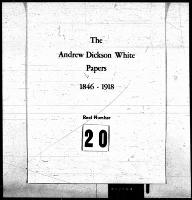 The Intercollegiate Regatta victory made the Cornell navy a prime subject in the fall. On October 16 a student applied for the position to be vacated by John Nelson Ostrom, I can serve the University as an oarsman as well as a janitor. Registrar Wilson prepared a list of the crew members showing their ages and scholastic standing, Ostrom described the training regimen observed by the oarsmen on November 17, and on February 12 he wrote White that although his employment by the university met his current expenses he must leave school unless he could raise three hundred dollars to satisfy his creditors. Newspaper clippings record charges made against the Cornell crew's eligibility. Frieze and White discussed the Sage organ in letters of December 8 and 11, White received the first word from Randall Lee Gibson since the Civil War on February 4, and on the 10th White wrote at length his answers to questions about secret societies sent him on behalf of the Princeton Alumni Association. A February 17 document proposed a resolution prohibiting state aid to any privately owned school, and in a letter of the 16th William Channing Gannett discussed the subject. A number of letters record the efforts of White to assist a retired Irvington merchant, Frederick W. Guiteau, in preparing a bequest to provide a student loan fund at Cornell.