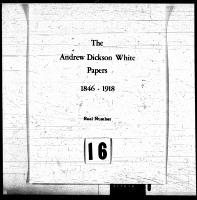 In the spring White made a New York hotel his headquarters, and worked there on reports, speeches and articles. The correspondence reflected Ithaca developments, and included an unfriendly note from Princeton's James McCosh, an opponent of agricultural colleges. After reading the investigating commission's report on the university, White wrote a strong letter to Ezra Cornell on April 27 lamenting Cornell's neglecting the university and ... giving your thoughts, your energy, to various matters of business utterly and wretchedly insignificant . . . . Letters include Russel's reports on Felix Adler's popular and controversial lectures, White's arrangements for moving his family to Ithaca, and negotiations with J. Weidenmann, whose landscape plans for the university and bills for them were rejected by White and the Trustees. An interesting note on speaking fees was written by Edward Everett Hale on July 6. A letter from Elizabeth P. Peabody is one of many from colleges, agricultural societies, and individuals commenting on White's published speeches and offering opinions on industrial and agricultural education.