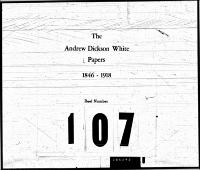 Among old friends and educators on this reel are Angell, Sanborn, Smalley, and Sprague. There is a letter on September fourth from Jackson, who had taken a diplomatic post in Havana, and a note from Harriet Monroe in Peking. There are a number of letters. from Cornell professors, including Cooper, Hewett, Vladimir Karapetolf, Edward Bradford Titchener, and Wait. White's Seven Great Statesmen was released on the tenth of September, and many correspondents after that date were recipients of copies of the book. There are letters from a Belgian scholar who had been employed by White to make researches in preparation for a new edition of the Warfare of Science. On August 22nd the Secretary of the Carnegie Institution asked help defining the humanities. The institution had been charged with being unfair in allocating funds. There are letters from Robert Underwood Johnson of the American Academy of Arts and Letters, and a number of recommendations for candidates to the Hall of Fame.