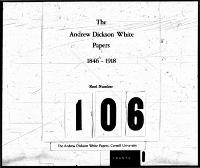 This reel records White's activities in his semi-retirement. There are several letters to and about a German scholar who had belittled Holls' contribution to the first Hague conference, and there are letters from Goldwin Smith about his hope to spend his last days at Ithaca and to make a substantial contribution to the university. Carnegie wrote on January 29th that he would give $50,000 toward a chemical laboratory, but declined to give more to the library because he felt too many books were being housed that were seldom, if ever, referred to. There are letters from Edwin Ginn, Rush Hawkins, Hugo Munsterberg, and Robert H. Treman. White wrote Burr about his visit to Spain, begun in February.