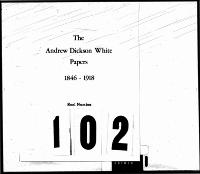 The death of White's daughter in September brought letters from Walter C. Kerr and Horatio S. White, among other Cornellians, and led White to review the financial provision he had made for the remaining members of his family. On October 19th Theodore Stanton suggested a plan of resident tutors to improve the tone of campus fraternity life. He referred to the high quality of the Cosmopolitan Club, and in November a Harvard man wrote for advice about establishing a Cosmopolitan Club at Cambridge. Schurman wrote that in his annual report he was proposing that one year of arts and sciences be required of all candidates in Cornell's professional schools. White and Wheeler were in consultation with the President about a plan for the federal government to establish commercial courses in a number of universities for the benefit of students from South America and the Orient. On December sixth the principal of Ithaca High School proposed the teaching of American history and government in all tax-supported high schools.