The Fate of Ivermectin in Manure Composting 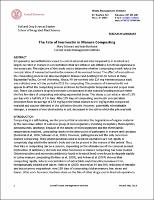 Ectoparasites and anthelmintics used to control external and internal parasites in livestock are largely excreted in manure in concentrations that are lethal or sub-lethal to beneficial organisms in the ecosystem. The objective of this study was to determine whether composting would reduce the concentration of ivermectin found in the manure of de-wormed horses. The effect of ivemectin on the composting process was also investigated. Manure and bedding from 60 horses at Oxley Equestrian Facility, Cornell University, Ithaca, NY de-wormed with 114 mg ivermectin paste each, was collected over a 3-day period in 2011 for composting. The presence of ivermectin did not appear to affect the composting process as shown by thermophilic temperatures and proper mass loss. There was a severe drop in ivermectin concentration in the manure/bedding mixture within the first few days of composting indicating exponential decay. This decay occurred at a rate of 1.8% per day with a half-life of 3.6 days. After 175 days of composting, ivermectin concentration decreased from an average of 1.59 mg/kg in the initial mixture to 0.6 mg/kg in the composted material and was not detected in the soil below the pile. However, potentially mineralizable nitrogen, a measure of microbial activity in soil, decreased in the soil on which the pile was built.